Brazilian dating is direct and straightforward, especially compared to American or European dating culture. Brazilian women play little to no games and are direct with their needs and desires. However, as a foreigner, there are certain things that you must absolutely know.

The first rule of dating in Brazil is the kiss rule. Kissing between a man and a woman—I’m referring to strong and passionate kissing—is treated not much more than a handshake. Thus, it’s typically very common to kiss a woman you just meet after 10-15 mins of knowing her.

Of course, this is not a quick and fast rule and it’s not something that will happen all the time, but if there’s a connection between you and the girl and your faces are physically close to each other, you shouldn’t have any issues directly kissing the girl.

While I used to be uncomfortable and uncalibrated kissing women this early in the game, after spending a few weeks in Brazil, kissing women so fast became just a normal part of the game and something I learned to do very naturally.

Nevertheless, a kiss, especially one that happens so quickly doesn’t really mean much. I’ve gone out many times in Brazil and learned that most women will kiss indiscriminately, but getting much more intimate is another story. In fact, I can’t tell you how often I’ve met girls at bars or clubs, made out with them all night long, went on a second date, made out with them even longer and then when it came to sex and taking our relationship further, things fizzled out very quickly.

Just remember: a kiss is simply a kiss and nothing more. They’re so common that they’re close to meaningless. The only thing that a kiss means is that you’ve established sexual attraction between you and the woman and that you have zero interest in having a platonic friendship with her. That’s important because you’ve also demonstrated that you’re a man who isn’t afraid to go for what you want.

Typically, the kiss should either when you first met (in the bar, club, etc) or on the first date (if you met online, or on the street and you only had a chance to get her number). In other words, if you’ve already met in a romantic setting, and have talked to her for more than 15-20 minutes, you should have gotten the kiss already. In fact, some of the Brazilian women will feel weird if you hadn’t tried to kiss them early on (more on this later).

Exceptions of one-night stands aside, here’s what the progression of your dating with a Brazilian will be like. For the first date, I would advice meeting her for something casual like drinks at a chill bar, restaurant or, better yet, some outdoor lounge.

When it came to the first date, one of my favorite places in Rio was Lagoa (which means Lake). There were a bunch of chill bars that served various cocktails. It was dark and intimate, and plus, the two of you could sit next to each other as well, perfect for getting to know each other further and getting physical.

For the second date, you can take her to another restaurant or bar, but a much better idea would be something like meeting her at the beach and then hanging out with her throughout the day. If you’re in a beach city like Rio de Janeiro, agree to meet her at the beach at a particular “Posto.” Enjoy the beach for a few hours and then once it starts to cool down (3-4 pm), go for a walk along the beach, have some juice or a light meal.

The purpose of this date is to keep building comfort. Since attraction was already established when you first met (otherwise she wouldn’t have agreed to see you again), right now your main goal is to establish comfort. When you spend time with a woman before sex that tells her that you will probably stick around after you have sex with her. (In biological terms that signifies that you will stick around to take care of the offspring and not simply run off if she gets pregnant. Of course, with modern contraceptives such as condoms and birth control pills that’s no longer true, but the brain adapts slower than technology.)

The amount of time you spend with the woman will depend on how fast she becomes comfortable with you. I typically aim to have sex by date 3 at the latest, but will also push for it earlier. Remember that Brazil is unlike your Western country and women value men who are aggressive in trying to get what they want. Brazilian men are super aggressive, so it helps to be aggressive yourself, otherwise, if you’re too soft and passive, a woman might think you’re either not interested in her sexually or just gay.

Instead, what I advocate is the “cool guy” approach. When you meet her on a date, just act cool and relaxed and don’t worry about how Brazilians act. Of course, you should be aggressive, but don’t be overly aggressive. When you act this way, you won’t automatically trigger her “gringo” failsafe switch and she’ll continue to spend time with you while you’re seducing her.

Eventually, after spending lots of time with her and building lots of comfort, she’ll hopefully won’t resist the offer to come back to your place and have hot and passionate sex.

Ultimately, the biggest difference between Brazilian dating culture and American is that Brazilian women are more direct than American women. They play fewer games and intimacy happens much quicker. In fact, one of my most interesting moments happened when I met a great girl, we were enjoying each other’s company and within 20-25 mins of me meeting her, she kept telling me how much she liked me. This would never happen in America, or, probably, elsewhere in the world. 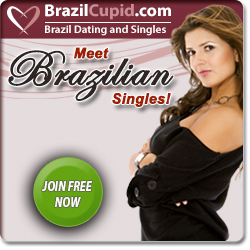